Navaratri, a nine-night Hindu festival, where nine forms of Goddess Durga or incarnations of Divine Feminity are venerated along with her auspicious anthropomorphic form of slaying Mahishasura, a demon with buffalo appearance, and/or riding a lion or a tiger on the tenth day. Our ancestors who certainly were spiritual martials commemorated the advances of feminine possibilities to spiritual extremity in the course of ten days. It commences from the worship of Shailaputri or Her incarnation as the daughter of mountain-king to Sidhhidatri or the generous manifestation of all terrestrial and non-terrestrial affluences. Apart from the Indian Peninsula, the worship of Durga (Amba) had been prevalent across the principalities of Asia that had the cultural exchange with Indic civilization. While India is celebrating the pageantry of Goddess’s arrival now, lemme take the readers on a virtual but brief tour to the ancient ethnicities who did reverence to the same form.

Unlike many Indian versions of renderings, Durga is venerated mostly through two distinct forms across the Indonesian archipelagos. One is the regular, dramatic depiction where Goddess sticks the buffalo faced demon with a trident triumphantly and another one is where Goddess stands calmly on the reclining buffalo while holding up its tail. Considering her as Shiva’s consort, She’s found in the Candis (lit. temple) of Indonesia and worshipped as Sang Hyang Bathari Durga.

Let’s start with Java. The earliest known Hindu empire of Java was Tarumanagara (Dharma-nagara) which was established by Jayasingawarman in the 3rd century CE and disintegrated into two new kingdoms afterward. Chinese traveler Fa-Hsien (Faxian) on his return trip from India to China was struck in Java owing to trade wing, gave an account that “heresies and Brahmanism were flourishing, while the faith of Buddha was in a very unsatisfactory condition”. As per evidence, since around the 5th century AD, shrines for the worship of Durga along with Shiva (as Bhairava), Ganesha, Agastya were widespread. But adherence to Devi Durga was exclusively promoted by Queen Mahendradutta (or Gunapriyadharmapatni) of Majapahit empire who was the consort of Balinese Hindu King Udayana Warmadewa.

In the first half of 2nd Millenium CE, Devi Durga, who was considered as the Mother Goddess of agriculture and fertility earlier throughout the archipelago, went through a radical change into the fierce form Rangda. Further demonization began with the composition of a tale by Calon Arang that narrated an angry widow Rangda who called up goddess Durga in bringing disease to East Java during hero King Airlangga’s era. Though this negative tale has been internalized in the performing arts, She is being revered in both the depictions.

It again led to distortion after Islamization when even the ritualistic mantras used to invoke Durga were distorted. A book namely “Durga’s Mosque” by Stephen C. Headley is a must-read in this context. With the aim of bending existing faith with Islam, myths corresponding with Islamic cosmologies were introduced by Puritans. A vile myth combining the Islamic idea of Nafs with Hindu gods narrates a person accompanies by the reflection of four good/evil personalities that are born along with the creation of the world. And to keep the four good personalities safe from demonic Kala (split-seed son of Shiva) and his “demonic extra-uterine” mother Durga, exorcism is necessary. This forced false notion of syncretism in the 18th century destroyed the dynamic syncretism of the Indic and the indigenous Austronesian culture (Javanism or animism) previously prevalent there and religious sites were vandalized.

Now move to Bali. The influence of Hindu culture from Java has been very strong in Bali which was introduced with the entry of ancient Javanese language into the region. Ramayan, Mahabharata and other puranic texts were shared the islands from Java. Ancients of Bali used to follow “Agama Tirtha” or Religion of Holy waters. Currently Indonesian laws that permit only monotheist belief, yet traditional Agama Tirtha revers Hindu Trinity as well as many Dewas and Bhataris (God and Goddesses). Balinese temples are called Pura while Javanese ones are called Candi, named after goddess Chandi due to her ubiquity in all the shrines.

Though many carvings has been discovered, the only prominent shrine with Mahiṣamardini being the prime deity is 9th century’s Pura Bukit Dharma Durga Kutri. 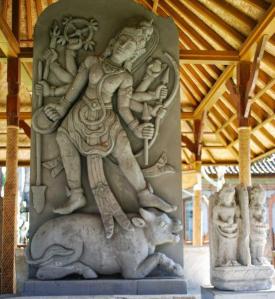 But in Sumatra (Melayu) and other parts of Indonesia, Goddess is only worshipped as the consort of Batara Guru (Shiva), not in her fierce avatar, Durga. Her images unearthed from Indonesia are just a Google search away. 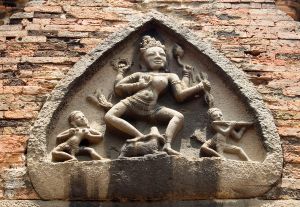 The early evidence of Indic culture’s influence dates back to the 4th century CE. The predominance of Hinduism was undisturbed in the reigning Champa or Nagara Champa empire till Mahayana Buddhism enters the region.

Po Nagar is a Cham temple enshrining Mahisamardini founded around the 7th century. It is dedicated to Yan Po Nagar (Durga) which was later vietnamized as Thiên Y A Na during the attempt to assimilate the Cham into later Viet culture. Along with the image of the goddess with trident climbing upon a buffalo, goddess in meditative stance and ShivaLinga are being worshipped. 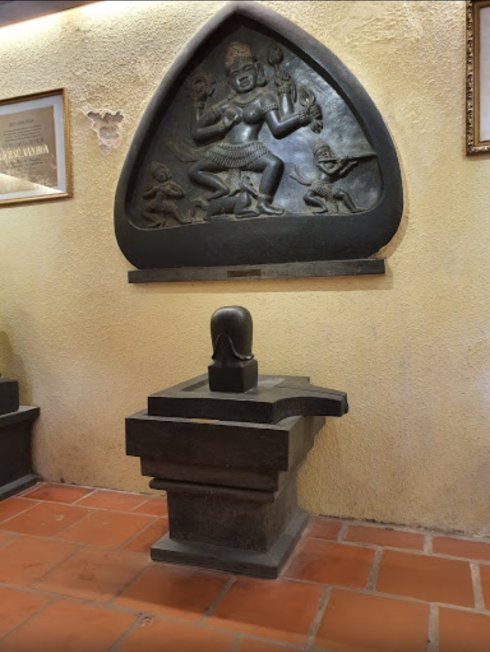 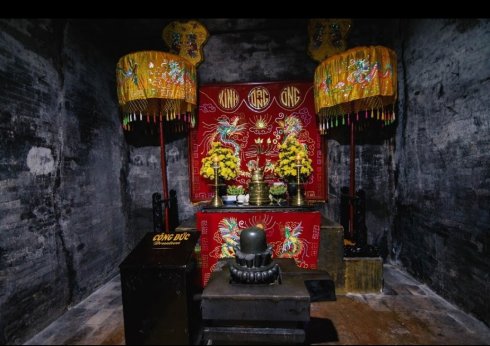 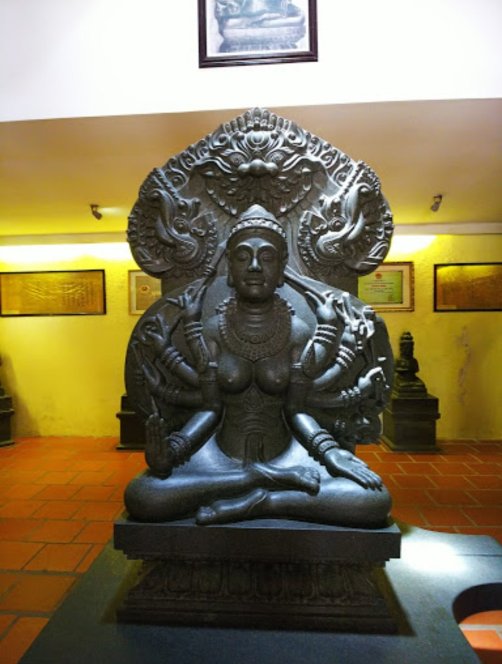 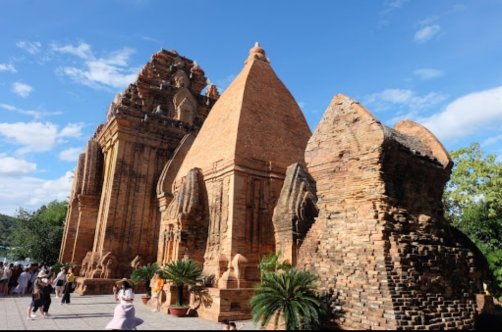 Another temple out of a few Cham Hindu temples left without being completely absorbed into Confucian Vietnam is 4th-century shrine Mỹ Sơn. The majority of the structure is destructed during the Vietnam War of the late 90s, yet images of Goddess with armory as well another in a meditative stance are found along with temple inscriptions and other sculptures. The Museum of Cham Sculpture in De Nang of Vietnam has a collection of sculptures of these ruining entities. 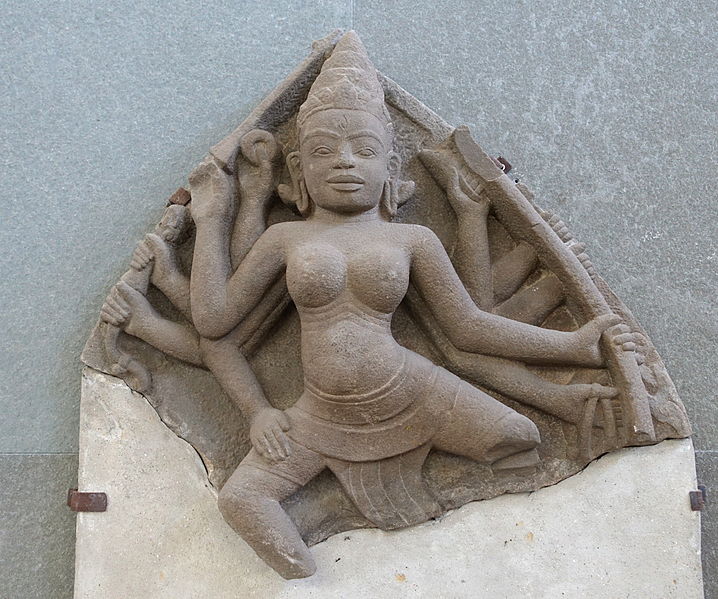 As per the present evidence, Indic presence prospered in Afghanistan during the Kushan (Kuei-Shang: nomadic Yuezhi tribe) empire after occupying the Hindu Kush and Gandhara and then during the Hindu Shahi dynasty. His reign demonstrates religious syncretism of different beliefs that is evident from his coins depicting Iranian, Hindu and Greek divinities. Kanishka I being the most prominent and benevolent figure of the empire converted to Mahayana Buddhism considering it as an equalizing religion for his region, however, his successor adopted Shaivite Hinduism and later named his son Vasudeva. Vasudeva then genuinely converted to Hinduism. 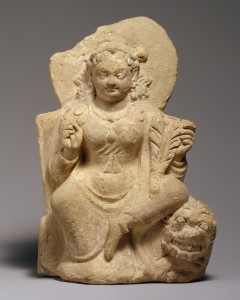 The dynamic cultural synthesis between Afghanistan and Gandhara influenced the artistic and linguistic domain of the region. The statue below depicts Devi slaying buffalo headed demon while the upper portion is not intact. In addition to it, marble images of Suryadev with his usual high boots as worshipped in India, Ganesha, Shiva and Brahma were discovered from Gardiz. Kushans who ruled the silk routes for years dispersed the worship of Indic divinities across the current Taliban heartland.

Another evidence of Amba along with her consort was found from Tepe Skandar (Qal’a-i Rajput) of Kabul during excavations by Japanese archeologists in the 1960s. 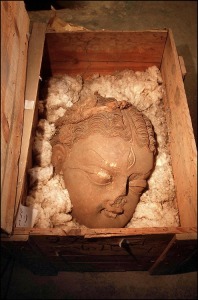 Distorted sculptures, coins and other iconographies of Tape Skandar date back to the late 6th century prior to the arrival of Ghaznavids. The Islamic conquest of Afghanisthan caused a spike in iconoclasm and forced conversion subsequent to which Indic culture went into decline. 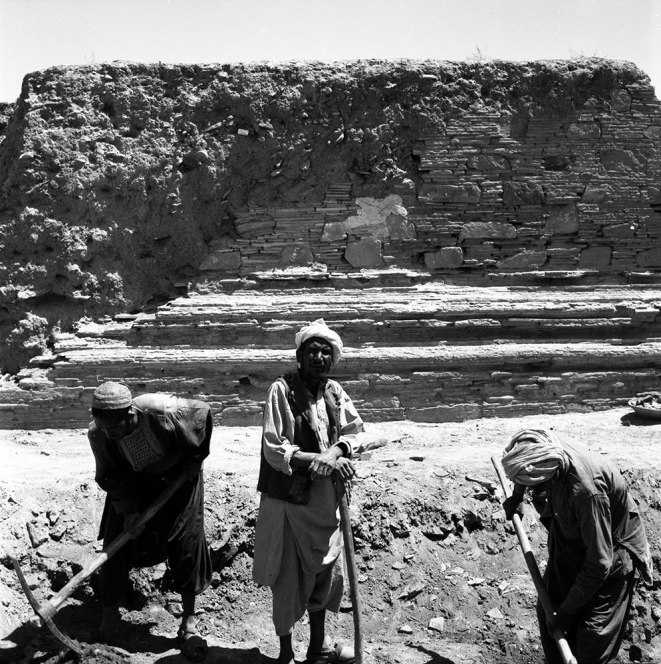 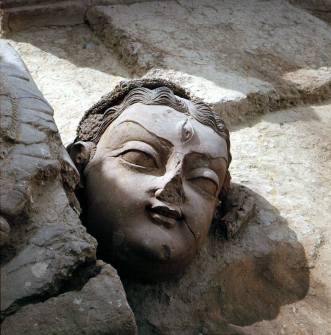 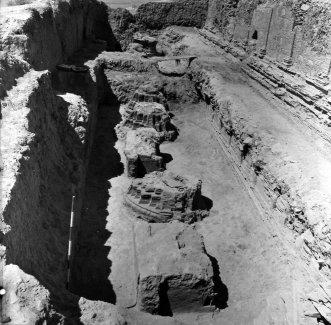 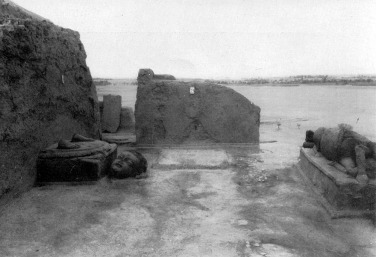 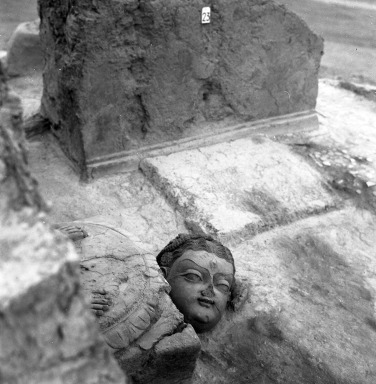 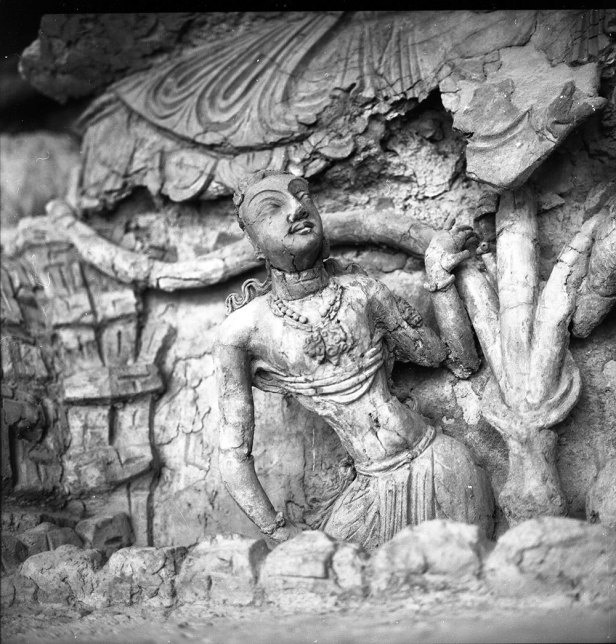 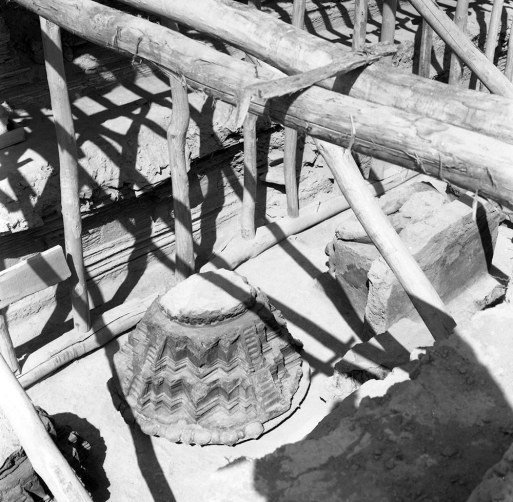 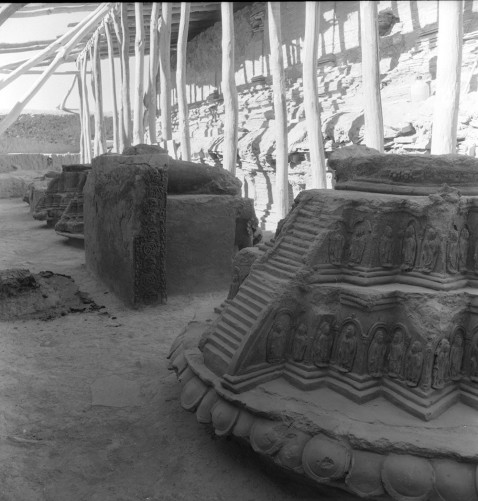 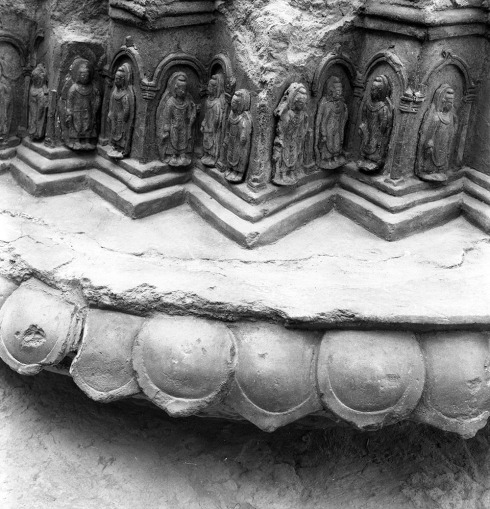 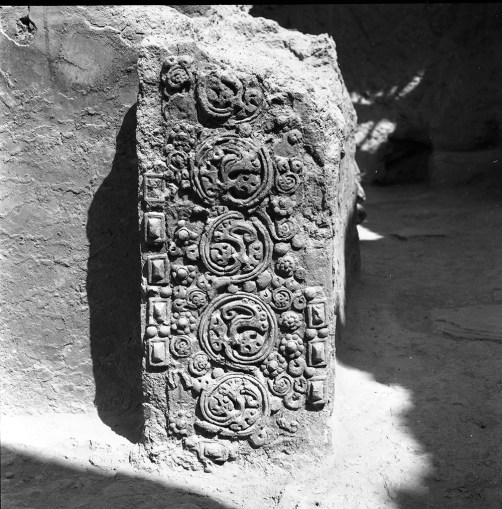 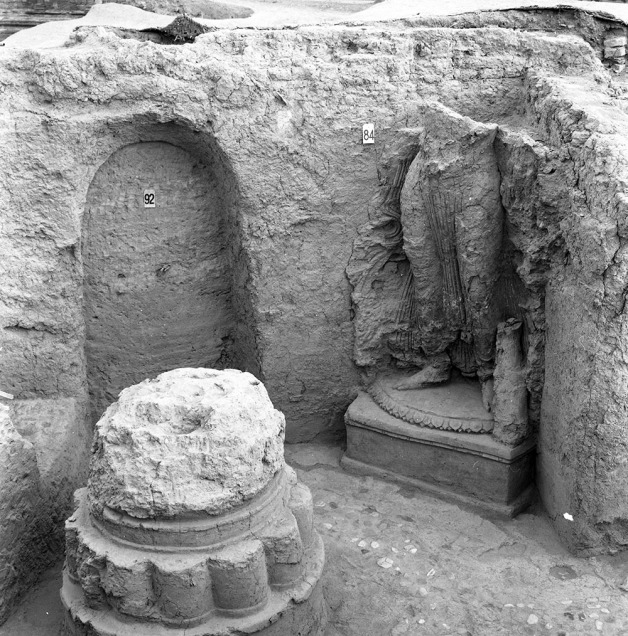 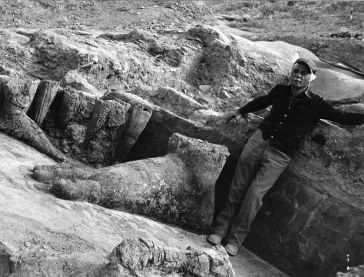 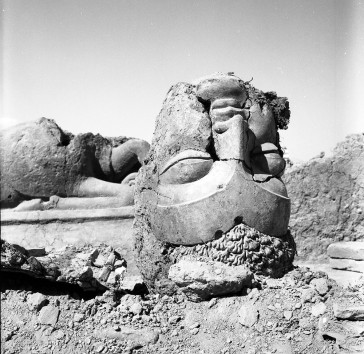 Probably the only Durga temple left in Afghanistan is Asamai temple. Following a deadly attack on a Sikh temple in Kabul, all Indian emigrants except one for maintenance of the last existing Hindu temple, have returned to India earlier this September. 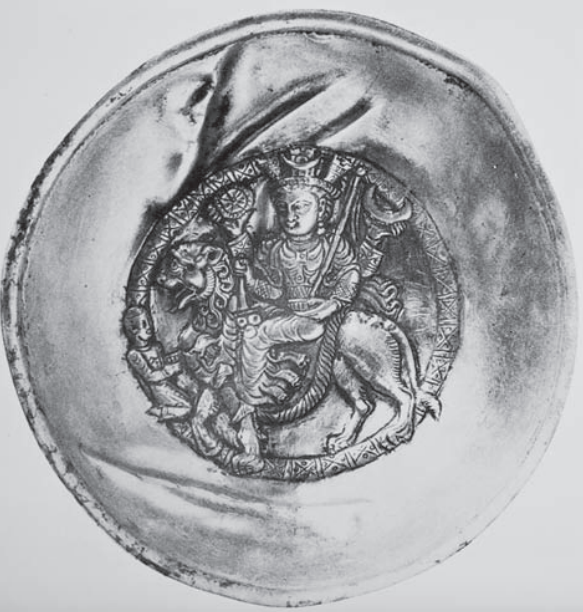 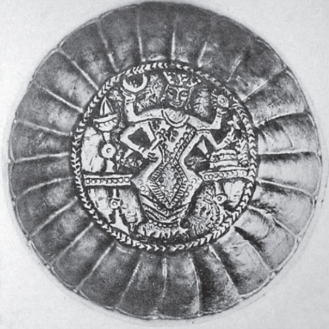 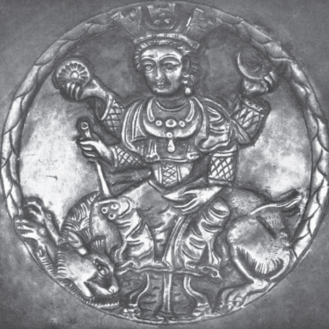 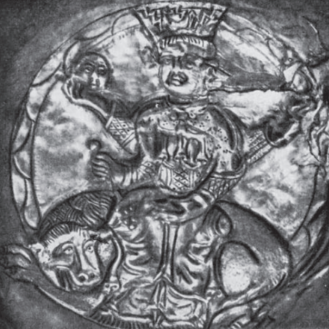 Four armed female deity depicted as emblema of a miniature silver bowl was discovered at Khwarezm of Uzbekistan in 1990. The inscription of the vessel tells that it belongs to “the year 700”. Considering the 700th year of the ancient Chorasmia empire, they might have been crafted during the late 7th century or early 8th century AD. Goddess majestically seated on a lion holding a chakra and torque (or the crescent moon) directs towards Kushano-Indian contacts and Kushan as well as Sogdian goddess Nanā. Another 7th century silver rhyton is found from Northern Iran, hence links to Sasanian empire, the very last Persian dynasty that ruled the Near East. The heavy lidded eyes of the figurine suggest Indian face-type. Again, Sasanians are followers of Avesta.

Who’s Nanā (नना)? A female or most popularly mean Mother. Rigveda graces the phrase as “कारुरहं ततो भिषगुपलप्रक्षिणी नना” which translates to “I am a bard, my father is a physician, my mother’s job is to grind the corn”. “Nana” in form of the Mother Goddess has been revered in Indic, Kushan, Armenian and many other cultures with slight phonetic variations. In “Nani” temple (pronounced as “bibi Nani” by Iranian speakers in Balochistan and Afghanistan) or Hinglaj Mata temple of Balochistan, the goddess is revered as Durga. The similar is the case with Avestan Goddess Nana, who is also the consort of Oesho (Trident and Kamandalu holding blue-skinned God) or Shiva, slaying the buffalo demon. South Asia, being the genetic homeland of Europeans and all other non-African civilization, must have been the dominant source of culture during demographic expansions by proto-Indo-Iranians. Even as per evidence Eurasian Sakas (Scythian tribes) and Sogdians (Greater Iranian nomads) were indulged in persistent exchange with Indic Culture. “Zurvanite-Zoroastrian” dualism that is organically evolved in the region also mimics Indic allegories to a great extent.

Here ends the brief account on the presence of devi Amba, the goddess on the lion far off India. Advanced historiography and modern scientific approaches provide enough basis for the hypothesis where ancients of this land emigrated and populated all non-African lands. Much more than the pictographic puzzles discovered from the Indus-Saraswati Basin, the cradle of Indian civilization, awaits to be deciphered.