Holding a wide stretch of history, Cuttack proves itself as a high-intensity epicenter of culture throughout the timeline. The city is upright heterogeneous in nature when it comes to the religious aspect. Numerous temples, Mathas, Masjids, catholic structures across the city provide evidence the city was in fact a city of sects. Such religious communities were not only meant for the spiritual upbringing of the city but also used to affect the socio-political affairs of Cuttack.

This blog will focus on the various schools of Hindu philosophy blooming in the historic city and will follow up with other sects in another. Happy reading! 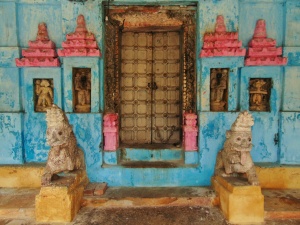 Even situating in an easy-to-find place in MathaSāhi, this living monastery pulls very few people aside locals. Matha encompasses a Jagannātha shrine amidst the wide courtyard. Enclosing the courtyard, there is pillared veranda with residential rooms.

Pārswadevatas, Udyotsimha as well as other architectural features are observed. There are symbols of conch and wheel over the entrance doorway to the shrine. The presence of the Ramanuja symbol on the ruined wall claims that Matha is affiliated to the Ramanuja sect. A depiction with King Bharata along with his brother Satrughna worshipping SriRāma’s feet can be found. Cracks and growth of vegetation are seen on the temple ceiling as well as the entire compound.

This matha is located on the backside of Cuttack Radio Station. Aside from the regular space of residence in Matha, there’s also a temple enshrining the deity Anant Basudev. The temple trust has renovated the Matha and the temple as well. Even though the temple is renovated, the architectural members of the old temple are on the verge of deterioration.

A small tank or Kund is permanently placed before the main temple and is kept dry throughout the year. On the very day of AnantaBrata, the tank is filled with water and the clear image of Anant Basudev is reflected in the tank. Devotees find it auspicious, hence Ananta Chaturdashi Brata holds great importance in the religious observances of the mutt.

Mastaram Matha is named after the saint Mastaram who established it. His devotion made the then ruler Mana Singh to grant huge donations for the construction of the Matha as well as the Laxmi Narayan Temple. However, the temple is now renovated and under the custody of the State Archeological Department. Detached fragments of the original temple are kept. Black chlorite made-idol of Lord Vishnu with Laxmi on his lap is worshipped. The figure of Gajalaxmi in Lalitasana is enshrined over the doorway into the inner sanctum. The temple wall houses many secular sculptures. 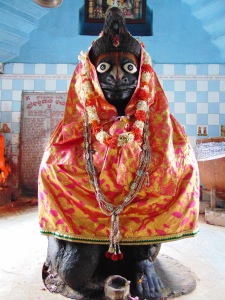 Although the Matha is in ruins, the primary attraction of the place is Laxmi Narayan Temple and the 5 feet tall idol of mythological bird, Garuda within the temple premises. When asked about the Garuda sculpture, the priest stated the Garuda image used to expand mystically. The original temple’s surface level was not much elevated as of today’s, so it used to take effort to smear Chandan-Sindoor on the Garuda’s forehead. One day Mahant of the Matha banged a Thali on the forehead of Garuda confronting his displeasure and the idol stopped expanding. 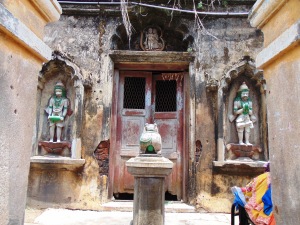 The mutt originally belongs to the Naga sect. It can be noticed at a distance of 100 meters away from the Purighat Police station. The entrance structure has an interesting depiction of two Sādhus doing havan. Two temples are seen within the premises. One is one Lord Rāma and the other is of Shesha Nāga. The temple, having SitaRama’s image on the doorway lintel, has Shivalinga with big copper vessel over it. 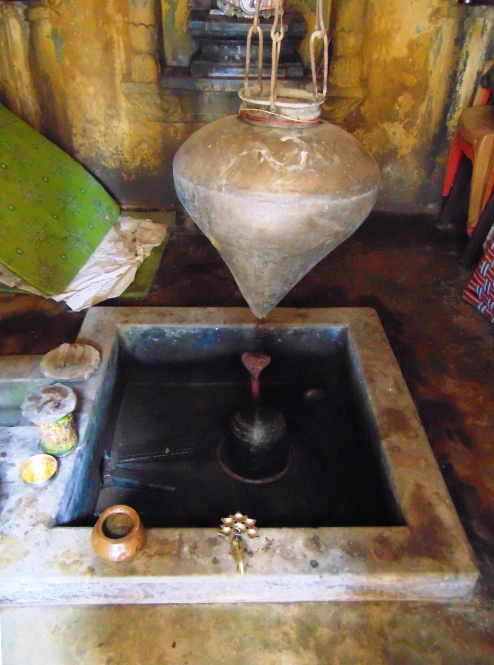 The mutt seems to be forcibly occupied by few from the nearby slum since they’re reluctant to welcome anyone into their domain. The above mentioned two shrines are now filled w their daily-use articles.

It’s another lesser-known yet historic temple. Sri Chaitanya is believed to visit the shrine while returning back from Puri. Intriguingly it’s named after the city itself. Situating close to Sati Chaura Chhaka on the Kothajodi river embarkment, only the arc entrance to the mutt is distinctly visible. The Mahanta stays inside the compound.

A saint namely Lacchman Bharati had a dream of the existence of Lord Cuttackewar in the place, he unearthed the Shivalinga and resided in the place with his disciples till his last breath. Samadhi of Lacchman baba exists within the mutt premises. The temple is very much renovated. Navgraha panel on black chlorite slab can be seen. The mutt is way lower than the present road level. Thus the rainy day fills the mutt complex with water paving the way to serious deterioration. 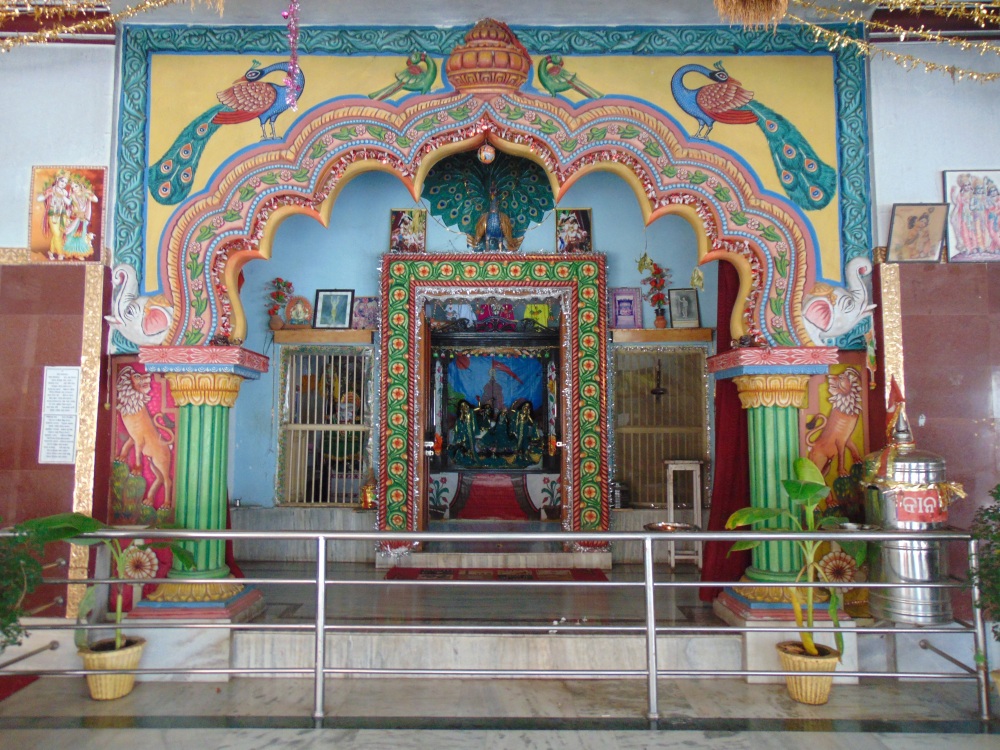 Nitai Gauranga Matha is well known as Bengali Sahi Matha. Moreover, the Mutt was not primary construction in this place. Accompanying Shri Chaitanya, his disciples migrated to Cuttack. Out of them, seven families from Bengal moved to this place (hence, is named Bangali Sahi) and stated MangalaChandi Puja. MangalaChandi Puja is basically Bangiya Shakti Puja based on a folktale alike Khudurikuni Puja of Odia culture. Later a Saint namely Sripada Ramdas Babaji Maharaj, who originally used to reside in Rasbihari Matha, moved to this place and set up this Gouranga Mutt. Then the Mutt inmates started Durga Puja in authentic Bengali style. This was in fact the second place in Cuttack, where Sarbajanina Durga Puja began. Mutt is affiliated to Gaudiya Vaishnav Sampradaya.

This mutt is identified as the first place in Cuttack where Sārbajanina Durgā Puja took place. Here Durga Puja was started in the year 1514 by Chaitanya Mahaprabhu whereas it was converted into a community puja in 1890. The mutt is established in 1683.

The mutt organizes both the Bāsanti Dussehra and Shāradiya Dussehra with huge pomp. Instead of sythentic color, dyes from fruits, vegetables, mud like ingredients are used. Devi gets embellished with silver filigree. Every year Chandi-Medha turns to be a great crowdpuller to Binod Bihari Durga Pandal. 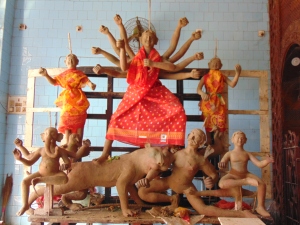 Nearer to Kathajodi bank, this Matha is located in Telengabazar. Rasbihari Matha earlier was known as Rādharaman Matha. Vaishnavite saint Sriradhāramana Dev established the Matha on the bank of Kathajodi. Saint Rāmdas who set up Nitai Gouranga Mutt was in fact the disciple of saint Radharamana and used to stay here. Subhas Chandra Bose used to visit his first spiritual guru, Ramdas Babaji Maharaj in Rasbihari Matha. Later owing to some conflict, he moved to Bangali Sahi and set up Nitai Gouranga Mutt. 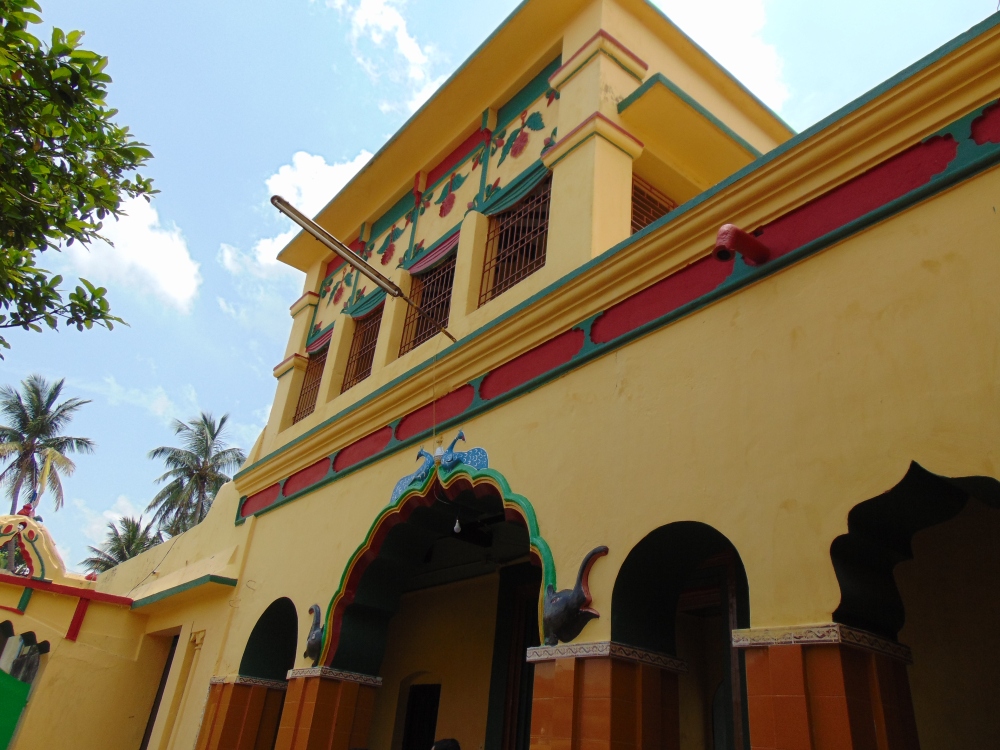 Gopal Jew Matha is described as the wealthiest Matha in the city. The mutt is affiliated to the Nimbārka sect. Mutt encloses a vast area within its ambit. Centring a shrine of RadhaKrishna, around fifty rooms for accommodations are bulit. It can be located at Choudhury Bazar area.

Sadly information regarding the mutt couldn’t be traced from anywhere. The mutt complex is now completely modernized, leaving aside the ancient remnants only. 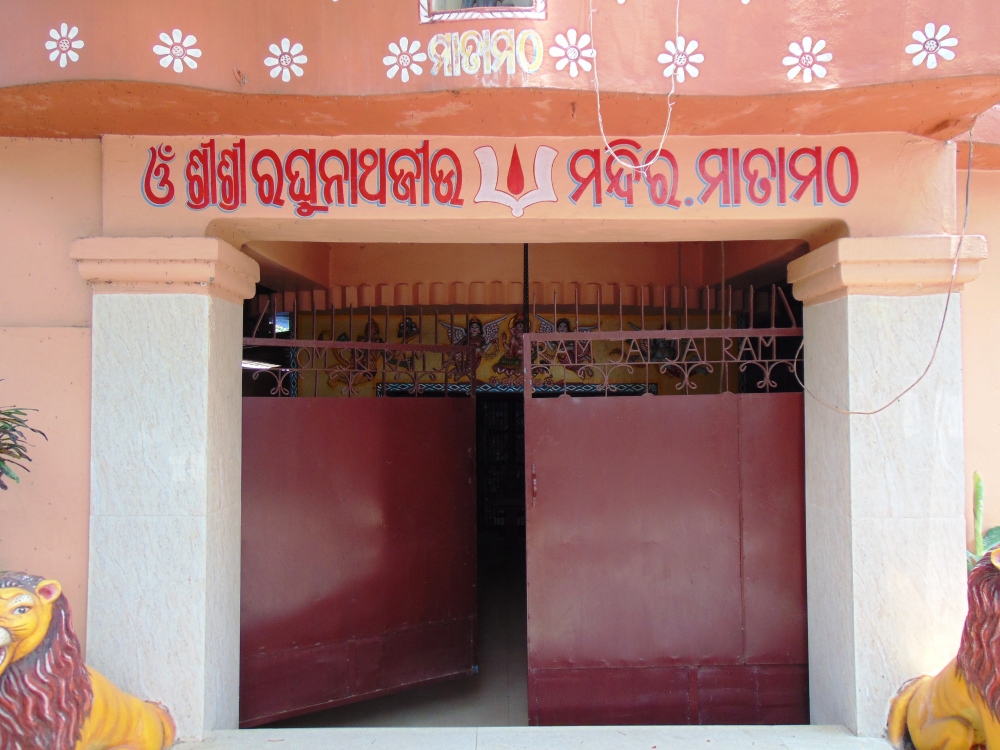 Small Mutt with a shrine and one-storied residential complex near the Kathajodi embarkment, now more or less is being treated as a landmark. Any trace of antiquity can’t be found within the mutt.

Here ends the blog. Still many a number of mutts are excluded from the list. I’ll update whenever I’ll get to visit new one.